If you’re having some friends and family over this holiday, then you might want to play some fun Christmas games.

Christmas charades is a fun game the whole family can enjoy at holiday parties.

If you’re not sure how to play, then you can read the instructions and rules below.

I’ve also created some fun Christmas charade word lists that you can print at home.

How Do You Play Christmas Charades?

You play the Christmas charades game by acting out a Christmas word or phrase without speaking, while your team members attempt to guess what you’re acting out.

You can either play as a group, and have one person act out the word or phrase for the whole group, or divide the group into two teams.

If you have one group, you could allocate points to a person for guessing correctly. At the end of the game, the person with the most points wins.

If you’re playing with two teams, then each player takes turns pantomiming for their teammates. The team that scores the most points at the end of the game wins.

Print out your printable list of Christmas Charades words and phrases and place them in a container (Christmas hats work well). Then you will need to select a person to start the game.

The first player will begin by picking a card.

Set a timer for each round. 1 or 2 minutes is usually enough. If the clue is guessed correctly before the timer runs out, that person or team gets the point.

If you’re playing in teams, and the team has not guessed the answer within the time frame, then you could give the opposing team one guess. If they get it right, then they get the point. 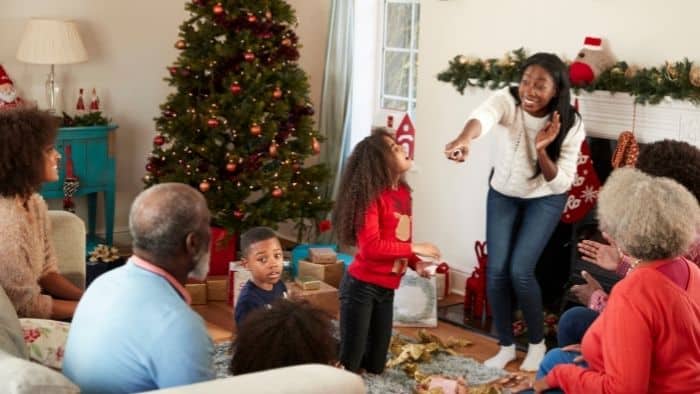 The rules for the charades game are pretty simple to understand.

2. The player has to act out the word or phrase to the rest of the group without speaking.

3. All the other players can shout out ideas and thoughts about what they think they may be acting out.

4. The first person to guess the word or phrase correctly gets the point. You can decide that they then need to act out the next word or that everyone gets a turn in order.

The following are some examples of action clues commonly used in charades:

1. What Kind Of Word Or Phrase Is It?

Start by indicating what kind of word or phrase you’re acting out. Is it a book, a movie, a song, a play, or a TV show?

* TV – air draw a box with your hands indicating a TV

* Play – air draw the stage curtains, or pretend to pull theatre rope with your hands

* Movie – pantomime a film camera rolling (hold one hand in front of your eye, and the other makes a cranking gesture)

Watch a quick video below explaining how to use the correct hand gestures to play charades.

Let the other players know how many words the phrase contains.

* You do this by holding up the number of fingers in the phrase.

* You don’t have to act out the words in order, so you can hold up two fingers for the second word, and later one for the first word, etc.

You can even break down a word into syllables by holding the same number of fingers as syllables a word contains against the inside of your arm.

You then tap the finger corresponding to the syllable you’re describing onto your arm.

Sometimes it’s easier acting out a word that sounds like the word you’re describing. Pull on your ear to indicate that ‘it sounds like.’

Hold your thumb and index finger close together to show something small. This could indicate words like ‘a’ or ‘the,’ for example.

Pretend to stretch an elastic band.

Make a “karate chop” gesture with your hand.

Link your little fingers to indicate that the word is plural.

Reach over your shoulder and wave your hand back.

10. To Highlight A Letter Of The Alphabet

You can chop your hand in a chopping motion toward your arm (near the top or bottom of your arm, respectively, if the letter is near the start or end of the alphabet).

Let them know they’ve guessed the correct word by touching your nose and pointing to the person who guessed correctly.

Remember that they might only have guessed one word of the phrase. You can hold up the finger corresponding to the word they guessed correctly and point at the person to confirm. Then move on to the next word.

To help you get started, I’ve written out some ideas on how to act out Rudolph the Red-Nosed Reindeer:

* Show that it’s a concept as a whole.

* Then point your nose, and air draw antlers on your head.

* If they still don’t get it, you can go down on all fours and pretend to pull a sleigh. 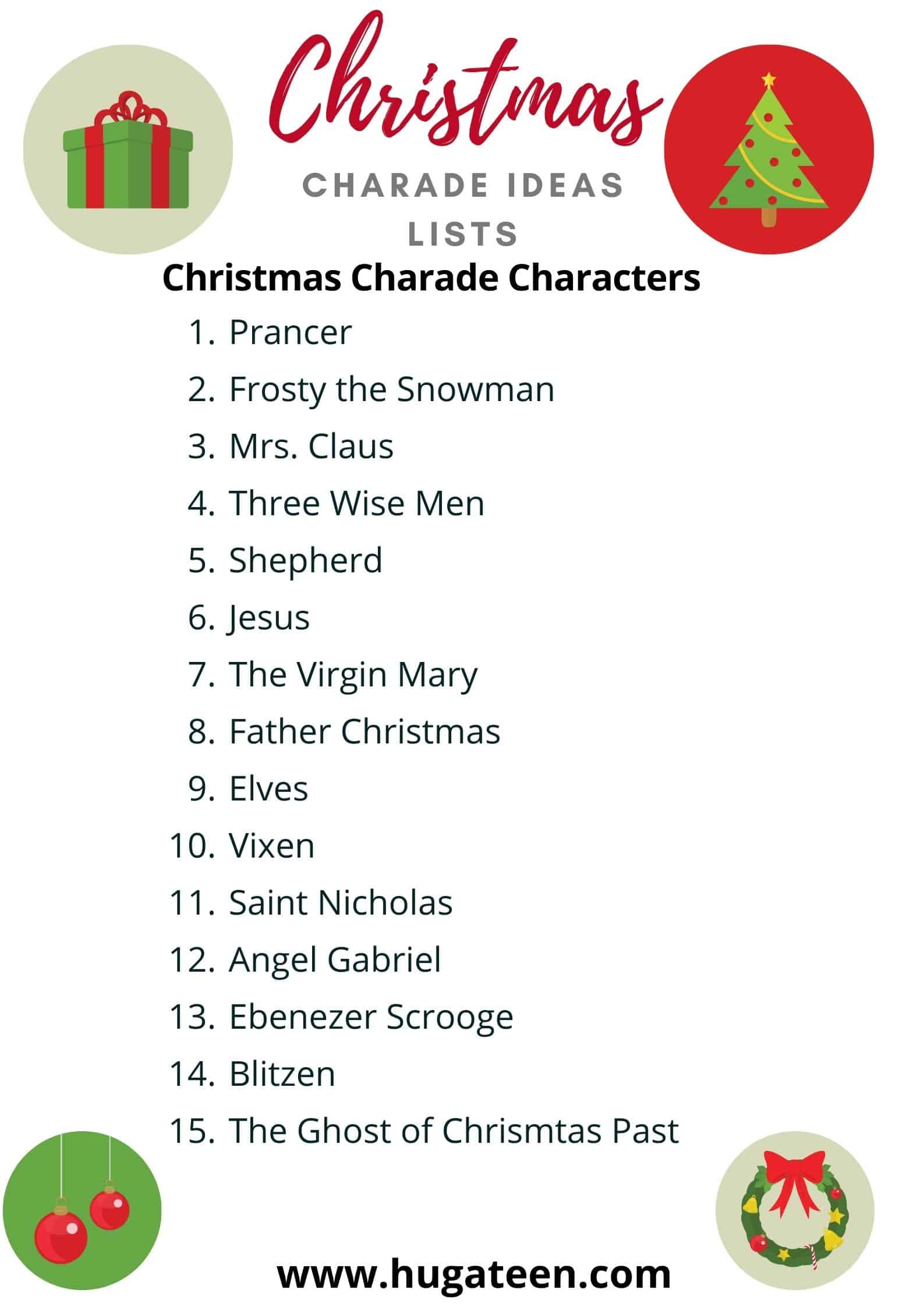 Adding Christmas decorations and objects to your game of charades is always fun, but not always as easy as acting out a phrase.

Here are some examples: 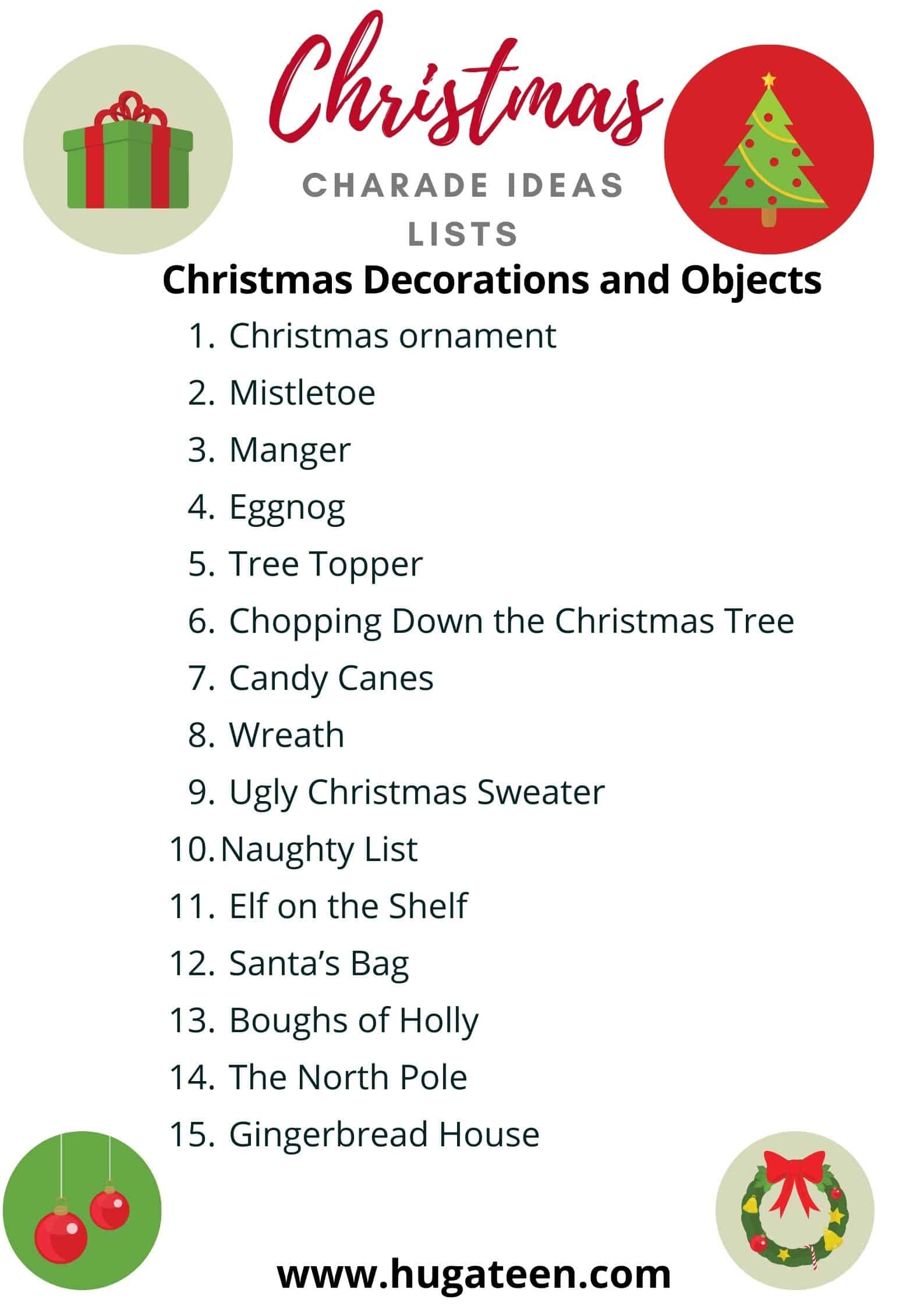 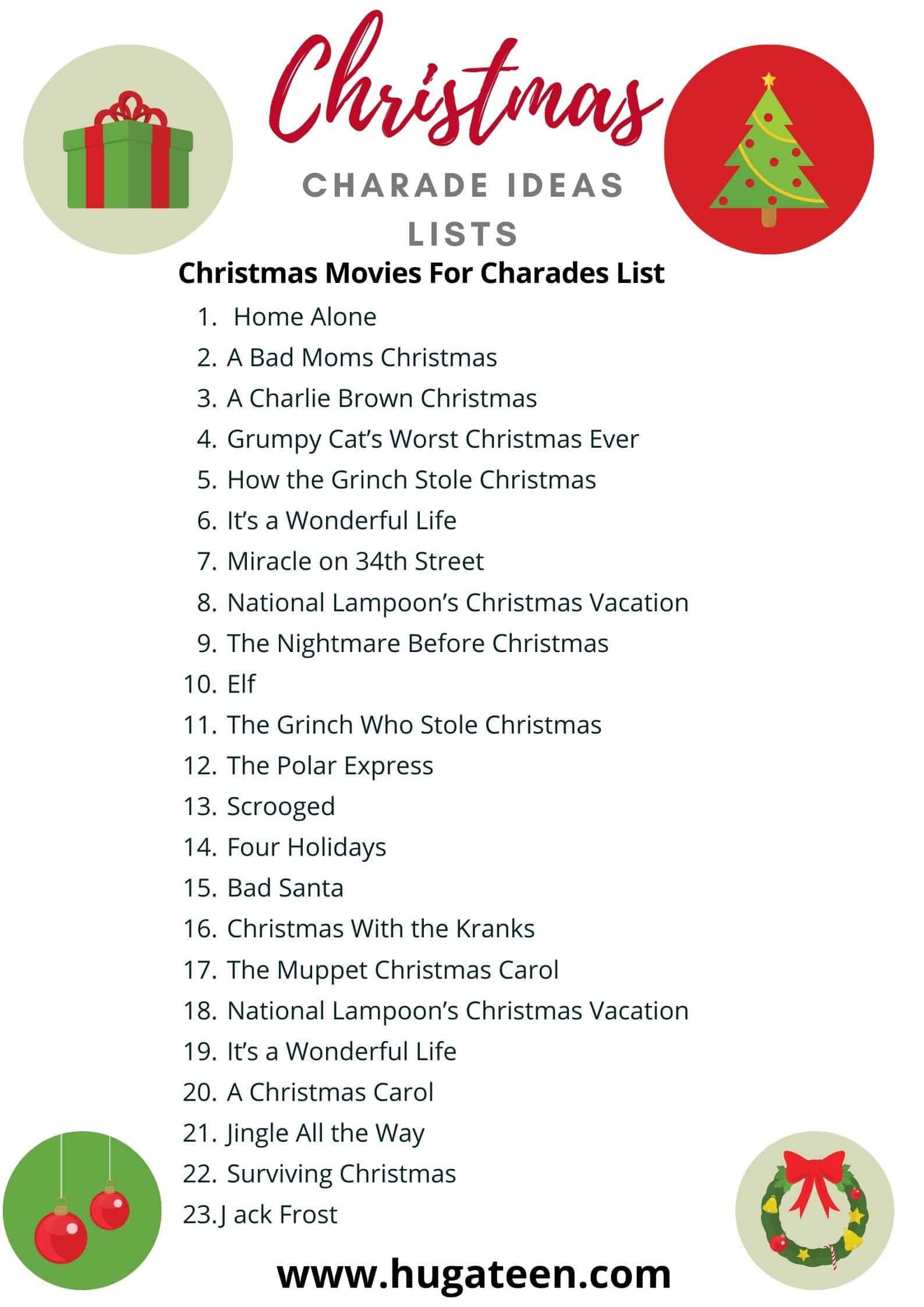 Players act out the names of these books. You don’t need to have read the books, as you can act out the words instead of the actual story. However, if someone knows the author as well, they can score an extra point just for fun. 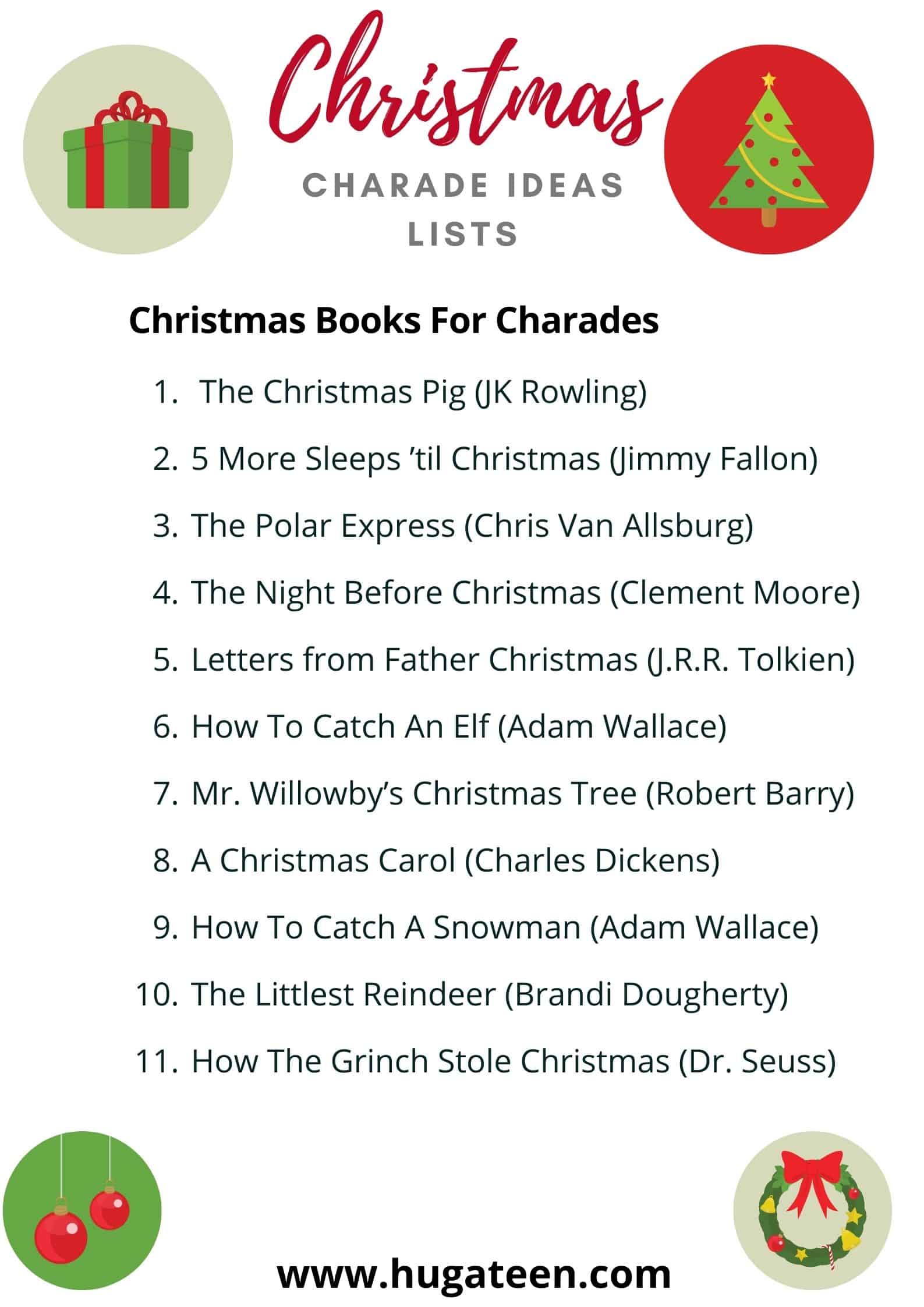 There’s nothing better than a good Christmas carol! You can act out some of these more popular ones. You can award extra points if they can sing the following few lines of the song as well. 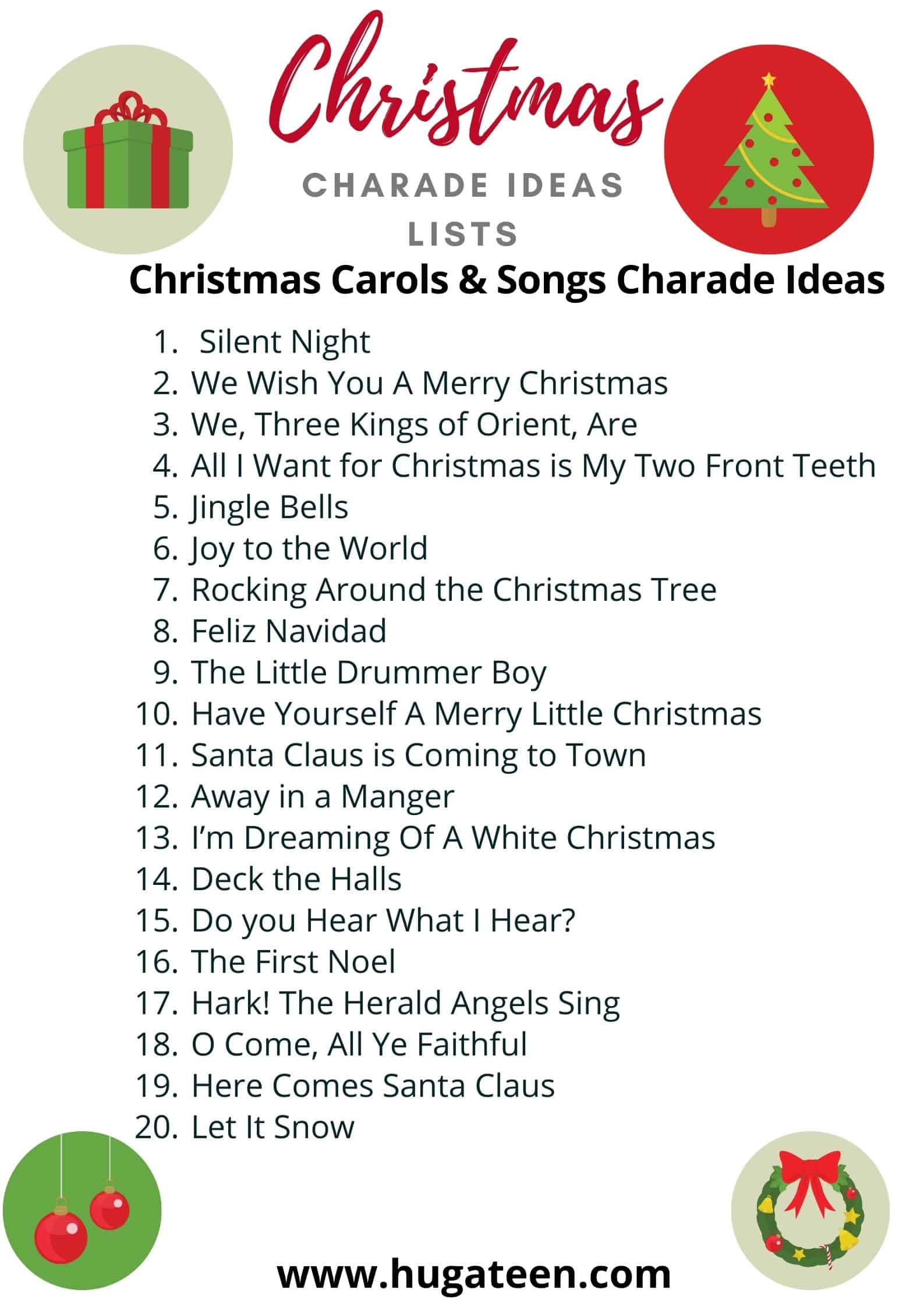 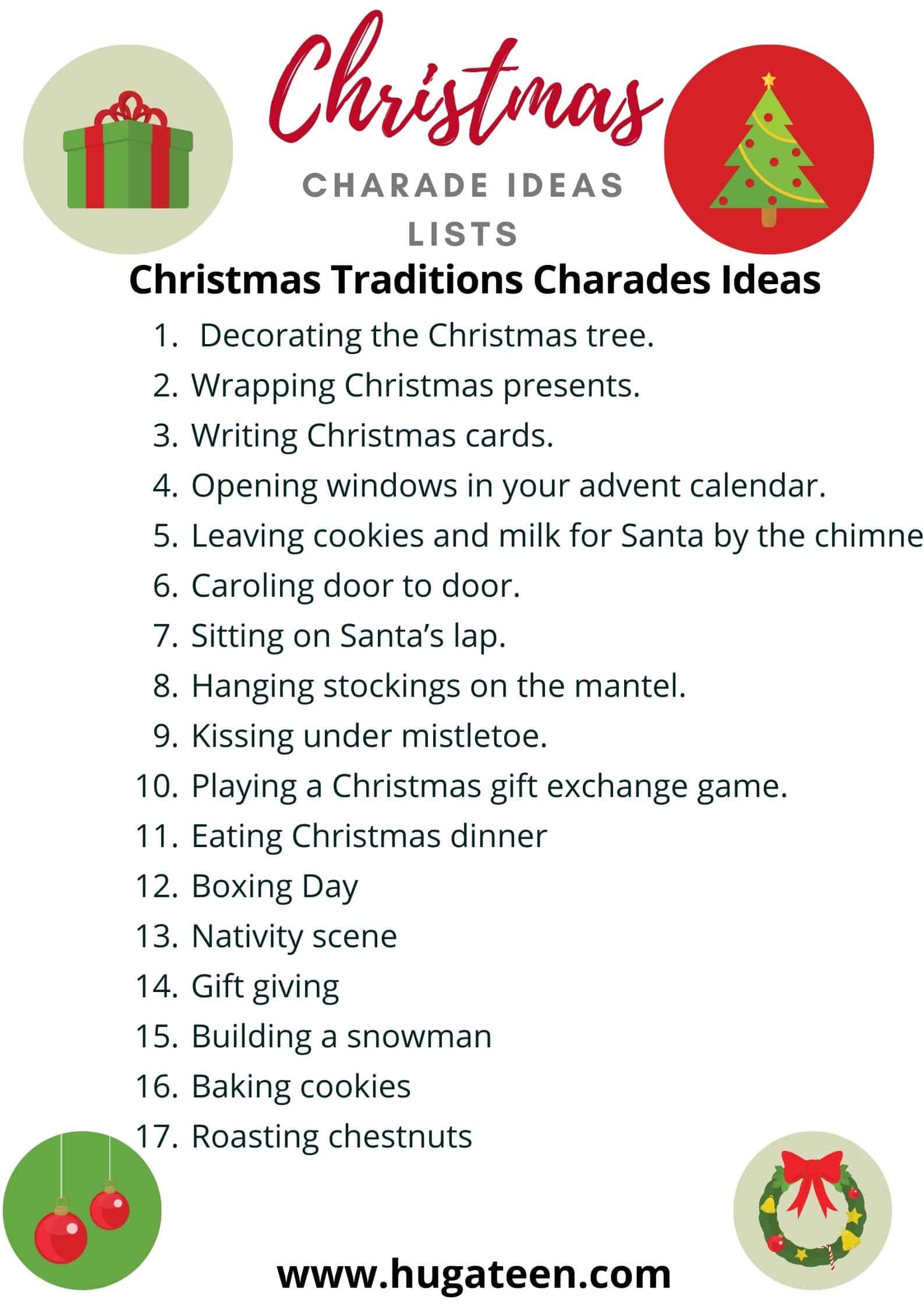 You may also want to include phrases from The Twelve Days of Christmas. 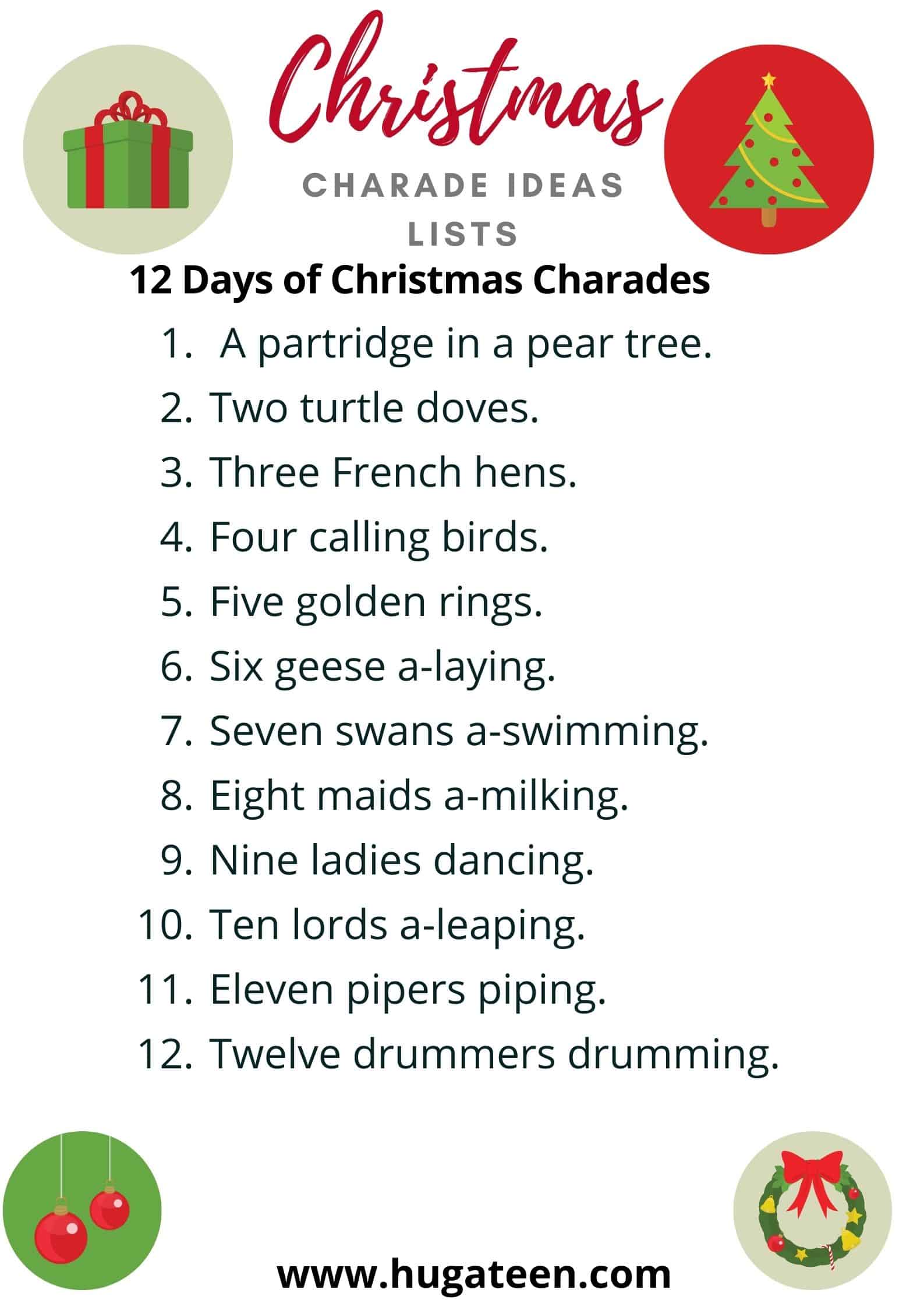 Keep in mind that young children might not understand what a gesture is.

If you have young kids playing then you could make two different containers; one for the younger players (with easier to act out clues, and one for the more advanced players.

Additionally, if you are playing with young children who can’t read yet, consider putting the clues in pictures, or reading them out to them.

Remember to mix up the ages of team members on both teams to keep things fair.

Wishing you and your family a very Merry Christmas!