There’s nothing quite as festive as playing holiday trivia games with your friends and family.

But who has the time to compile a trivia list during the busy holiday season?

So I’ve put together a list of Christmas song trivia questions and answers for you to enjoy while you’re relaxing around the fireplace.

What is the most popular Christmas song for children?
Answer: Rudolph the Red-Nosed Reindeer.

Which voice artist first recorded the song “Have Yourself a Merry Little Christmas”?
Answer: Judy Garland.

What gift was given on the fifth day of “The 12-days of Christmas” song?
Answer: Five golden rings. 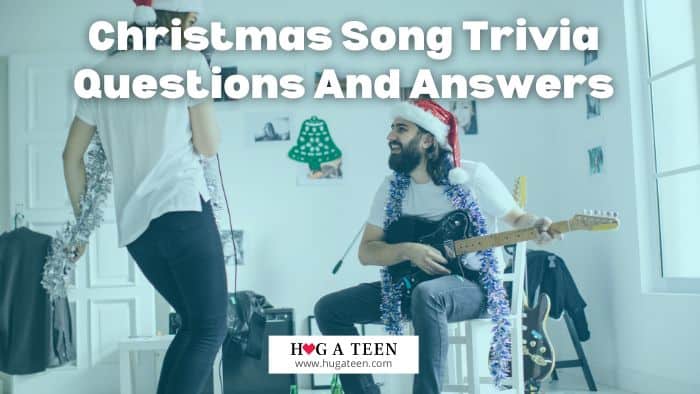 In a popular Christmas song, what else do we say after wishing a Merry Christmas?
Answer: A happy New Year.

Can you name all the reindeer that pull Santa’s sleigh in “Rudolph the Red-Nosed Reindeer”?
Answer: Rudolph, Vixen, Comet, Cupid, Dasher, Blitzen, Dancer, Donner, and Prancer

“Christmas Lights” was released by which British band in December 2010 as a digital download?
Answer: Coldplay.

Who had a hit single in 2011 called “Mistletoe”?
Answer: Justin Bieber

In the song “Last Christmas” (by Wham!), who did he give his heart to?
Answer: Someone special.

What do you hear on every street corner during Christmas?
Answer: Silver bells.

Which Christmas character has a button nose, corn cob pipe, and a jolly happy soul?
Answer: Frosty the Snowman.

In the song “Up On the Housetop,” which character is seen up on the roof with the reindeer?
Answer: Santa Claus.

Which 1994 Christmas favorite begins with the lyrics, “I don’t want a lot for Christmas. There is just one thing I need.”?
Answer: “All I Want for Christmas Is You” by Mariah Carey.

Fill in the blank to complete the lyrics: Deck the ___ with boughs of holly.
Answer: Halls.

In the song “12 Days of Christmas”, what gift did the true love give on the seventh day?
Answer: Swans a-swimming.

Which popular Christmas song has the following line: “I don’t want a lot for Christmas, There is just one thing I need”?
Answer: “All I Want for Christmas Is You” by Mariah Carey.

Throughout their solo careers, each of The Beatles members has released Christmas songs, but Paul McCartney’s and John Lennon’s are by far the most popular. What are the names of these two songs?
Answer: “Happy Xmas (War Is Over)” by John Lennon and “Wonderful Christmastime” by Paul McCartney

Fill in the blank to complete the lyrics from the song “Santa Clause Is Coming To Town,”
Santa sees you when you’re sleeping, and he knows when you’re ______.
Answer: Awake

As part of its effort to combat famine in Ethiopia, the musical supergroup Band Aid released what highly publicized Christmas song in 1984?
Answer: Do They Know It’s Christmas?

When mommy kissed Santa Claus, where was she?
Answer: Under the mistletoe

Which famous Christmas song can be heard during the shadow-puppet scene in the movie Home Alone?
Answer: “Rockin’ Around the Christmas Tree” by Brenda Lee

Santa checks his list _____ before he comes to town.
Answer: Twice

Who wrote the original version of the song “Wonderful Christmastime”?
Answer: Paul McCartney

True or False: “You’re a Mean One, Mr. Grinch” was written by Dr. Seuss.
Answer: True.

“How the Grinch Stole Christmas” is a television special adapted from the book by Dr. Seuss.

What is “roasting on an open fire” according to a popular Christmas song?
A. Chestnuts
B. Walnuts
C. Peanuts

In Eartha Kitt’s “Santa Baby” song, she asks Santa for the deed to what?
A. Millionaire’s Mansion
B. Ranch
C. Platinum Mine

Answer: A Platinum Mine.

The popular song “Santa Tell Me” is sung by who?
A. Mariah Carey
B. Ariana Grande
C. Britney Spears

The popular song “Like It’s Christmas” is sung by which brothers?
A. The Ball Brothers
B. The Jonas Brothers
C. The Doobie Brothers

🎅 If you’re looking for more fun Christmas activities this holiday season, we’ve created the ultimate Christmas Bucket List Ideas with Free Printable for you to choose your favorite activities.

“Jingle Bells” was inspired by what activity?
Answer: Sled races throughout the town.

“Deck the Halls” with what, according to the song?
Answer: Boughs of holly.

What is the most published Christmas hymn?
Answer: Joy To The World.

What was the very first song ever played in space?
Answer: Jingle Bells

According to the song, what do the characters ride when they sing “Jingle Bells”?
Answer: A one-horse open sleigh. 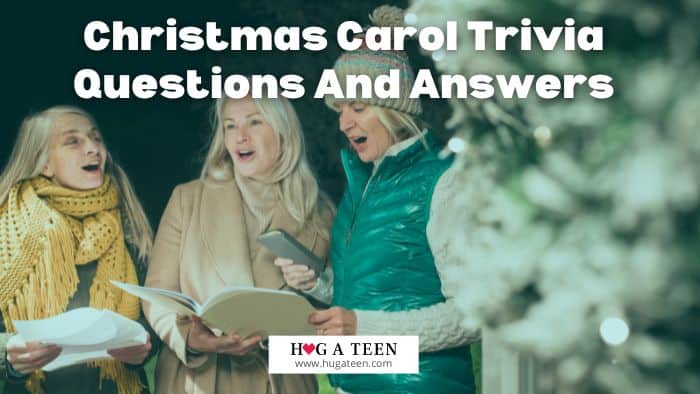 In Gone With The Wind, what Christmas carol does Melanie Wilkes sing at Tara’s Christmas?
Answer: Hark! The Herald Angels Sing!

For what instrument was Silent Night composed?
Answer: The song was originally composed for a guitar and two voices, but it is regularly played on church organs around the world.

On the first day of Christmas, what gift did true love send?
Answer: A partridge in a pear tree.

How many gifts does “My True Love” send in total during the “12 Days of Christmas”?
Answer: 364

What is the most popular Christmas hymn?
Answer: Jingle Bells.

Which Christmas carol has the following lines:
“The stars in the bright sky
Looked down where He lay
The little Lord Jesus
Asleep on the hay”

Answer: Away in a Manger.

In which Christmas carol do these lines appear:
“Let earth receive her King
Let every heart prepare Him room
And heaven and nature sing!”

Answer: Joy to the World

When you have finished singing “We Wish You a Merry Christmas,” what dessert do you request?

Where is the origin of the Christmas carol Silent Night?

A. Germany
B. England
C. Austria

Answer: Do You Hear What I Hear?

Recorded by many artists, the public debut of the song was done by Bing Crosby on Christmas Day, 1941.

Guess the Christmas carol: “Round yon virgin mother and child.”
A. Jingle Bells
B. Silent Night
C. I’ll Be Home For Christmas
D. We Three Kings

Guess the Christmas carol: “Joyful and triumphant.”
A. O Come All Ye Faithful
B. Joy To The World
C. Deck The Halls
D. Ave Maria

Guess the Christmas carol: “O tidings of comfort and joy.”
A. God Rest Ye Merry Gentlemen
B. The First Noel
C. Ding Dong Merrily On High
D. Away In A Manger

Guess the Christmas carol: “And heaven and nature sing.”
A. Away In A Manger
B. Joy To The World
C. While Shepherds Watched
D. White Christmas

Answer: Joy To The World

Guess the Christmas carol: “Locked down where he lay.”
A. The First Noel
B. Little Town Of Bethlehem
C. Joy To The World
D. Away In A Manger

Answer: Away In A Manger

Andy Williams sang which 1963 Christmas song written by Edward Pola and George Wyle?
Answer: It’s The Most Wonderful Time of the Year

Who sends the gifts in the song the 12 Days of Christmas?
Answer: The singer’s true love.

The “O Tannenbaum” song has another name. What is it?
Answer: O Christmas Tree

If not white Christmas, what is Elvis’ type of Christmas?
Answer: Blue Christmas

During what year did the popular Christmas song “It’s The Most Wonderful Time Of The Year” debut?
Answer: 1963

A Christmas album called “My Christmas” was recorded by which Italian tenor?
Answer: Andrea Bocelli

In what year was the Christmas song “All I Want for Christmas Is You” released?
Answer: 1994 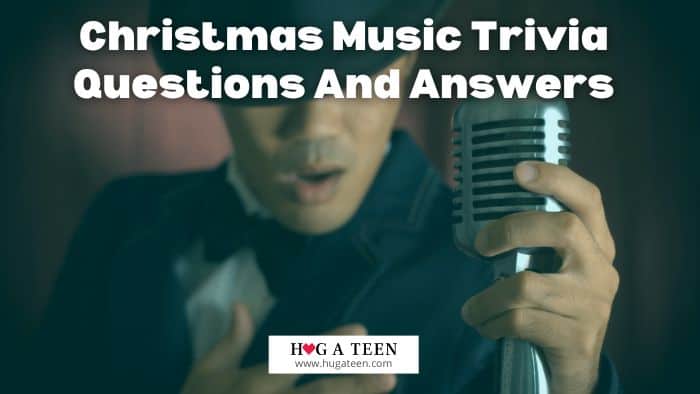 “Frosty The Snowman” is a popular Christmas song written by who?
Answer: Walter Rollins and Steve Nelson

This song was recorded by Crosby in October 1942. Despite being released well past the holiday season, it topped the charts for 11 weeks after it was released.

In English, what is the meaning of the song title “Feliz Navidad”?
Answer: Merry Christmas or Happy Christmas

What is the Christmas song that has two different titles?
Answer: The Christmas Song (Chestnuts Roasting over an Open Fire)

Which Christmas song has an English verse and a Spanish chorus?
Answer: Feliz Navidad

To ensure that it would be played on English-speaking radio stations, José Feliciano wrote the song in both languages.

According to the singer, what beverage should the audience drink during “A Holly Jolly Christmas?”
Answer: Have a Cup of Cheer

Guess the Christmas song: “I wanna wish you a Merry Christmas from the bottom of my heart”
Answer: Feliz Navidad

Guess the Christmas song: “Is a fairytale they say, He was made of snow, but the children know, How he came to life one day.”
Answer: Frosty the Snowman

What famous Christmas song was introduced to the world by the 1944 film Meet Me in St. Louis?
Answer: Have Yourself a Merry Little Christmas

In terms of Christmas royalties, how much money does Mariah Carey make every year?
Answer: £400,000

The Christmas single of which pop princess hit number one on the Billboard Holiday Charts in 2015?
Answer: Ariana Grande

Which Christmas song has been number one for two completely different artists?
Answer: Mary’s Boy Child

The first Christmas song that mentioned St. Nick and his story was released in what year?
Answer: “Up On The Housetop” by Benjamin Hanby in 1864

True or False: “White Christmas” is one of the most popular Christmas songs ever written.
Answer: True.

It is the best-selling single of all time, according to the Guinness Book of World Records, with 50,000,000 copies sold.

True or False: Gardner didn’t think his song “All I Want for Christmas (Is My Two Front Teeth)” would be popular

The song was sold to a New York music publisher, who said it will never be a hit.
When Spike Jones and His City Slickers released the song in 1948, it became extremely popular.

Boston Catholic Church banned this song when it was released in 1953.

It was forbidden from being played on many radio stations by the Catholic Church because of the fact that it mixed kissing with Christmas.

The ban was lifted after Jimmy Boyd explained to the Catholic Archdiocese that the “Santa” in the song was actually the boy’s father.

The song was written by Noel Regney and Gloria Shayne Baker in October 1962.

When Bing Crosby and David Bowie released a song in 1982, it became a hit. What is the title of the Christmas song?
A. Do They Know It’s Christmas?
B. Jingle Bell Rock
C. Peace on Earth/Little Drummer Boy

What does Mariah Carey not care about in “All I want for Christmas is You”?
A. Christmas Carols
B. Christmas
C. The Presents

The lyrics of the following Christmas song include the phrase, “Gone away is the bluebird, here to stay is a new bird.”

A. Winter Wonderland
B. It’s the Most Wonderful Time of the Year
C. Wonderful Christmastime

Felix Bernard and Richard B. Smith wrote Winter Wonderland in 1934. 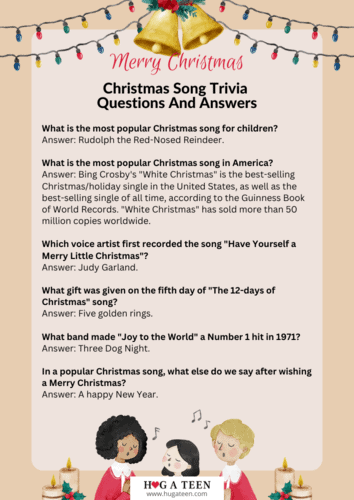