What Is Vitamin D Deficiency?

You are vitamin D deficient if you don’t have enough vitamin D in your body to function properly and stay healthy.

Blood tests showing levels below 20 are indicated as being deficient in vitamin D.

What Are The Effects Of Vitamin D Deficiency In Teens?

Detecting Vitamin D deficiency in teenagers and children can be challenging. A number of its signs and symptoms can be mistaken for growing pains, puberty, and the effects of an active lifestyle.

If your child exhibits one or more of these symptoms frequently, they may actually be deficient in vitamin D.

A lack of vitamin D can lead to a general lack of energy and chronic fatigue.

In a study by the North American Journal of Medical Sciences, vitamin D given to fatigued participants significantly improved the severity of their fatigue symptoms.

Getting a Cold or the Flu Often

Frequent illnesses, like colds and flu, may be caused by a vitamin D deficiency.

Bones cannot absorb calcium without vitamin D. This lack of calcium absorption can result in aches and pains in your teen’s bones, joints, and muscles. Taking more calcium won’t benefit your teen if they don’t have enough vitamin D to absorb the calcium properly.

In countries where there isn’t enough sunlight, people suffer from seasonal affective disorder (SAD), where they feel depressed. Vitamin D can affect the nervous system and your mood, especially if there are extended periods of not getting enough sunlight.

Although most Western countries have mostly managed to stop diseases like rickets in children, severe vitamin D deficiency can lead to bowed legs, curved spines, a pigeon chest, as well as skull or pelvic deformities.

A chronic lack of vitamin D can lead to osteoporosis (weak or brittle bones) in adults, which significantly increases the risk of bone fractures as we age.

Among the many functions that vitamin B plays in your child’s body is regulating insulin levels.
Blood sugar levels can spike if a child does not have enough vitamin D. this increase may eventually lead to diabetes.

What Are The Most Common Causes Of Vitamin D Deficiency?

We get most of our Vitamin D naturally from exposing our skin to sunlight. Therefore, if there is a lack of sunshine exposure, our levels of Vitamin D can decline.

The most common risk factors of Vitamin D deficiency due to lack of UV include:

Other risk factors include:

How Can We Get Vitamin D And What Does It Do?

Teens obtain vitamin D from exposure to sunlight, from certain foods that contain small amounts, or by taking supplements.

The body produces vitamin D through a series of steps.

When UVB rays hit your child’s skin, it interacts with a fatty molecule (7-dehydrocholesterol) found in the skin and forms pre-vitamin D.

After that, the liver converts it into D2.

The kidneys then convert vitamin D2 into an active form of vitamin D, which can be used by the body’s cells.

This allows the gut to absorb larger amounts of calcium and phosphate from absorbed food in the bloodstream.

Why Is Vitamin D An Essential Nutrient, Especially In Teens

Vitamin D is necessary for bone and muscle health, as it helps the body absorb calcium and phosphate from food.

As adolescence is a critical developmental period for bone health, having enough vitamin D to absorb calcium is extremely important.

Vitamin D is also involved in immune function and helps regulate cell growth. Vitamin D, unlike other vitamins, functions as a hormone. Every single cell in your body has a receptor for it.

As a result, your child’s bones, teeth, brain, heart, lungs, and musculoskeletal structure are all dependent on vitamin D.

Find out: How Many Teeth Do Teenagers Have?

There are a few ways to monitor and treat low vitamin D levels in children.

Ask Your Doctor For A Blood Test

If you believe that your teen might be vitamin D deficient, then you can ask your doctor to do a simple 25-hydroxyvitamin D blood test for your child.

Their ideal vitamin D levels should be between 40 and 80ng/mL. 20ng/mL and below is considered deficient.

After 3 months, you can do the test again to check if their vitamin D levels have improved. Once improved, the aim is to make sure that their levels stay normal. 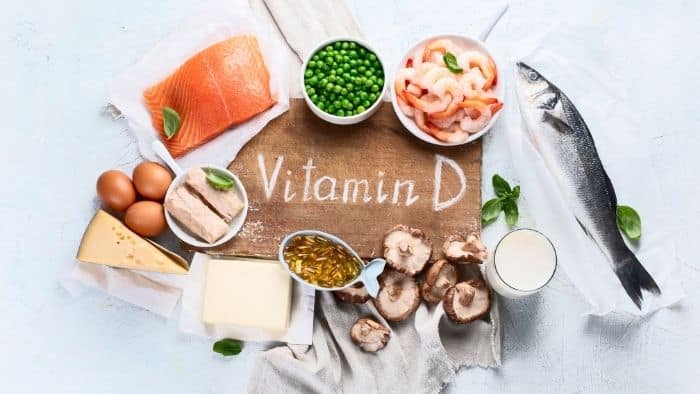 It can be difficult for parents to ensure their children get enough vitamin D in their diet because vitamin D isn’t usually found in many foods. Vitamin D is commonly added to milk and breakfast cereals in some countries.

Foods that are rich in vitamin D include:

The most reliable way to get enough vitamin D is by taking over-the-counter vitamin D supplements.

Most vitamin D3 comes from animal-source foods, while vitamin D2 is available from plant sources and costs less to produce.

Vitamin D2 is prescribed by doctors, while vitamin D3 is an over-the-counter supplement or part of a multivitamin.

One of the easiest and most inexpensive ways to get more vitamin D is to spend 10-15 minutes per day in the sun. Expose your teen’s skin to the sun’s UVB rays so that their body can make vitamin D.

Just remember that the amount of vitamin D your skin can produce will depend on the level of pigmentation of the skin. Darker skin has more melanin, which acts as a natural sunscreen, so you will need to spend more time in the sun to allow your skin to make vitamin D naturally.

Also, note that too much sun exposure can lead to skin damage, so there has to be a balance between getting enough sun to produce vitamin D and protecting your teen’s skin.

Teenagers and kids are best protected against vitamin D deficiency by taking an over-the-counter vitamin D capsule daily. Sun and diet can provide healthy amounts to your child, but it isn’t easy to verify whether those are enough to provide a sufficient dose daily.

How Long After Taking Vitamin D Will I Feel Better?

You can see improvements in health by taking over-the-counter vitamin D supplementation in just three to four months. Speak to your doctor to measure vitamin D levels before you start supplementation and to set the correct daily levels needed. In some cases, your doctor might recommend taking a higher dose to boost your levels quickly and then continue with a lower dose going forward.

Can Too Much Vitamin D Cause Problems?

Although rare, you can get vitamin D toxicity by taking large doses of vitamin D supplements over a long time.

Taking 60,000 international units (IU) a day of vitamin D for several months has been shown to cause toxicity. This level is many times higher than the U.S. Recommended Dietary Allowance (RDA) for most adults of 600 IU of vitamin D a day.”mayoclinic.org

If you get tested, then these are the levels you need to look for:

A buildup of calcium in your blood is the main symptom of vitamin D toxicity, which may lead to nausea, vomiting, weakness, and frequent urination. This might progress to bone pain and kidney problems, such as the formation of calcium/kidney stones.

Can You Absorb Vitamin D From The Sun Through A Window?

Most glass blocks UVB light, which is needed to produce vitamin D in the skin, so you probably won’t get enough vitamin D through a window.

Although sunscreen blocks most of the UVB rays that trigger vitamin D production, you can still get enough vitamin D from the sun and protect your skin.

Let’s be honest, we don’t all apply sunscreen every day, all day to our children’s skin. They may apply sunscreen in the morning, but by the late afternoon, most of the sunscreen will have worn off when they’re doing sport.

To get enough vitamin D, they can expose their arms, legs, abdomen, and back to the sun for 10-15 minutes, 3 times a week. Once your body has produced enough, it will automatically dispose of excess vitamin D to avoid an overload.

Teens should therefore follow good sun protection after 15 minutes of sun exposure, as they won’t gain any further benefits and could get sun damage instead.

Can You Get Vitamin D On A Cloudy Day?

Yes, just as you can get sunburnt on a cloudy day, you can get enough UVB radiation on your skin to produce enough vitamin D.

How Much Vitamin D Do I Need?

According to the National Institutes Of Health, teens needs between 600 IU (recommended) and 4000 IU (upper limit) per day.

What Kinds Of Vitamin D Dietary Supplements Are Available?

Vitamin D is found in supplements and multivitamins.

To find the best multivitamins for teen boys and teen girls read the posts below:

You can get two types of vitamin D in supplements, namely D2 (ergocalciferol) and D3 (cholecalciferol). Both forms increase vitamin D in your blood, but D3 might raise it higher and for longer than D2.

Vitamin D (D2—ergocalciferol) is a vitamin D supplement available in prescription and over-the-counter formulations. It is available in oral tablets and capsules, as well as an oral solution. Vitamin D2 comes from plant sources and is the most common form of vitamin D found in fortified foods.

What is vitamin D3?

Vitamin D3 (cholecalciferol) is an over-the-counter vitamin D supplement available in a variety of strengths. It is available in oral tablets and capsules, as well as oral and sublingual solutions.
Vitamin D3 comes from animal sources such as fish oil, fatty fish, liver, or egg yolks.”
singlecare.com

Why Do Doctors Prescribe Vitamin D2 Instead Of D3?

Vitamin D3 is used for dietary supplementation, and be bought over-the-counter as a supplement or multivitamin.

When Should I Take Vitamin D?

Vitamin D is a fat-soluble vitamin, which means it does not dissolve in water and is best absorbed when consumed with high-fat foods. To boost absorption, it is recommended to take vitamin D supplements after you’ve eaten food. Avocados, nuts, seeds, full-fat dairy products, and eggs are all good sources of fatty foods that help you absorb vitamin D.