Although airsoft games are widely popular in the US and many other parts of the world, some parents are concerned that the realism of the guns in this war game might not be appropriate for younger children.

Therefore, deciding whether or not it’s safe for your child to play airsoft is an important question that we’ll discuss in this article.

This post will discuss the airsoft age limit, how to play the game, its regulations, and whether it is a safe sport. Let’s dive in.

How Old Do You Have To Be To Play Airsoft Games?

In most states in the US, there is no legal minimum age for playing airsoft. In many countries, (including the UK), kids from age 12+ can play airsoft gun wars on airsoft fields or arenas under the proper supervision of a parent or guardian.

According to FindLaw, airsoft is illegal in some countries, including Korea, Malaysia, Thailand, and Singapore, while in others, like Canada, replica Airsoft guns cannot be imported.

It’s best to check with the field or event where you want to play to find out their age recommendation or limitation.

Even though younger players may be able to join in, it might not be a great fit if a 10-year-old is playing against much older teens or even adults. If your 10 year old would like to play, it’s probably best to arrange a game with friends of similar age or play in your own backyard.

It’s also important to note that the legal age for purchasing an airsoft gun is 18 years or older.

Most venues rent out airsoft guns and protective gear in addition to providing the field, so you don’t necessarily need to purchase a gun yourself.

Remember that children under 12 must either play with a parent/guardian or obtain consent, and everyone must sign a waiver before playing. If you’re under 18 then a parent or legal guardian but sign the waiver on your behalf. 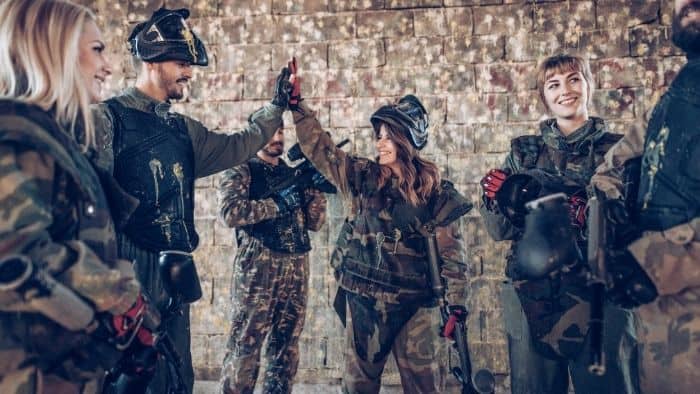 Airsoft is a game where players use airsoft guns to simulate war games.

The guns are pretty similar in appearance to real firearms. However, they are low velocity and use plastic projectiles and are thus classified as non-lethal guns and harmless to players.

Airsoft is similar to paintball in many ways, but there is no paint, so pellets might sting but will not leave paint marks on players’ clothing.

Airsoft guns are also safer than BB guns, which use steel BB balls. It is still important to wear full protective gear, as the plastic pellets can cause injuries to participants if their skin is not covered.

How To Play Airsoft

Airsoft is one of the best physical games that simulate actual battlefields. If a player shoots and hits you, you are required to surrender and leave the playing field.

When the plastic projectiles hit players, they need to let the others know they have been shot and leave the airsoft field. You can yell “I’m hit” or “I’m out” to let other players know.

You can also hold the gun above your head or use a red flag called a “dead rag” to signal to other players that you’re leaving the field so that they don’t shoot you again.

Players can enjoy the game best if they follow the field rules and take care not to injure themselves or others. 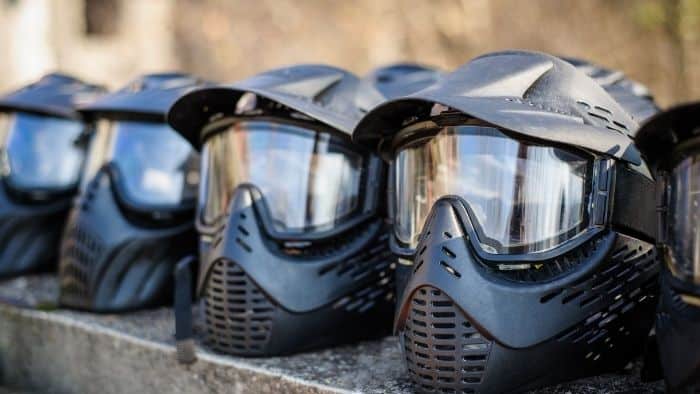 The plastic projectiles used in airsoft guns mostly just sting you when you’re hit. However, it can cause serious injuries if safety guidelines are not followed.

If you wear short-sleeved shirts or leave parts of your body exposed, you will leave the playing field with welts and bruises.

You can avoid getting injured by wearing the following airsoft safety gear:

After getting proper safety equipment, stick to the following rules to avoid getting hurt or hurting other players:

What Hurts Less Paintball Or Airsoft?

If you have never played both games, you must be wondering which one hurts less.

Paintballs are bigger and heavier than airsoft pellets, so they have more impact when they hit you. A player feels more pain when hit by a paintball than an airsoft gun.

However, this doesn’t mean airsoft pellets don’t hurt. Ensure you always have proper safety equipment and adhere to the rules when playing airsoft war games. 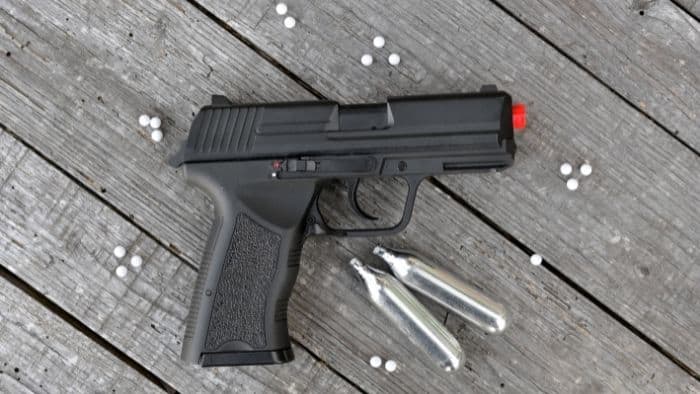 Most airsoft guns will include an orange tip to distinguish them from real firearms. For your own safety reasons, do not remove the orange tip when transporting an airsoft gun, as it allows the authorities to differentiate it from an actual firearm.

Taking off the orange tip of an airsoft gun is legal, although some states will not allow you to transport the gun without its orange safety markings. Check with the local, state, or federal laws on removing the orange tip.

Remember, having the orange tip on does not mean you are safe in public. Always carry the gun in an opaque and sealed container when you’re in public. It is advisable to remove the orange markings only when on playing fields or playing on private property. This way, you will not cause panic or make an officer think that you’re carrying a dangerous weapon in public.

Although airsoft guns are generally safe for all if well handled, various US states provide regulations on using them.

Here are a few airsoft gun regulations in different states:

Are Airsoft Guns Safe For 12-Year-Olds? 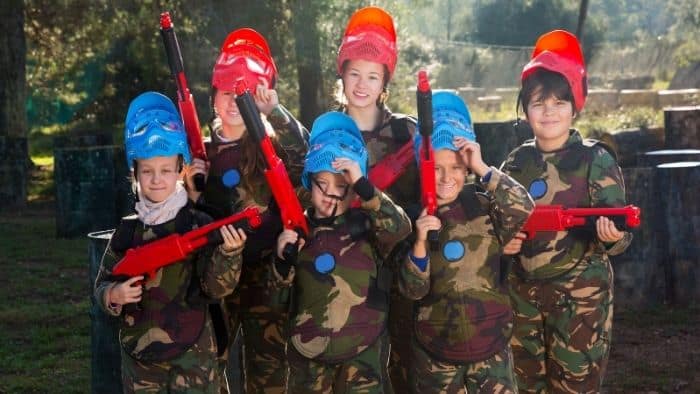 Cosmetically, airsoft guns bear an uncanny resemblance to actual firearms, but that is where the similarity ends.

Airsoft guns use spherical plastic pellets as ‘bullets’ and are safe for 12-year-old kids if they follow the safety precautions.

Even though airsoft guns are not dangerous weapons, they can inflict injuries on participants. It is not uncommon to hear of kids getting injured while playing airsoft. Parents and guardians need to determine whether their kids are responsible enough to play airsoft without hurting themselves or other players.

They will not get hurt as long as they follow the field rules and have safety gear on.

Note that some playing fields have a minimum age limit of thirteen, so try to find one that will take your 12-year-old.

And remember that they can only play airsoft gun war games under direct parental supervision, i.e., you will need to play alongside them.

You can find a list of US airsoft playing fields near you here.

Airsoft Fields Near Me 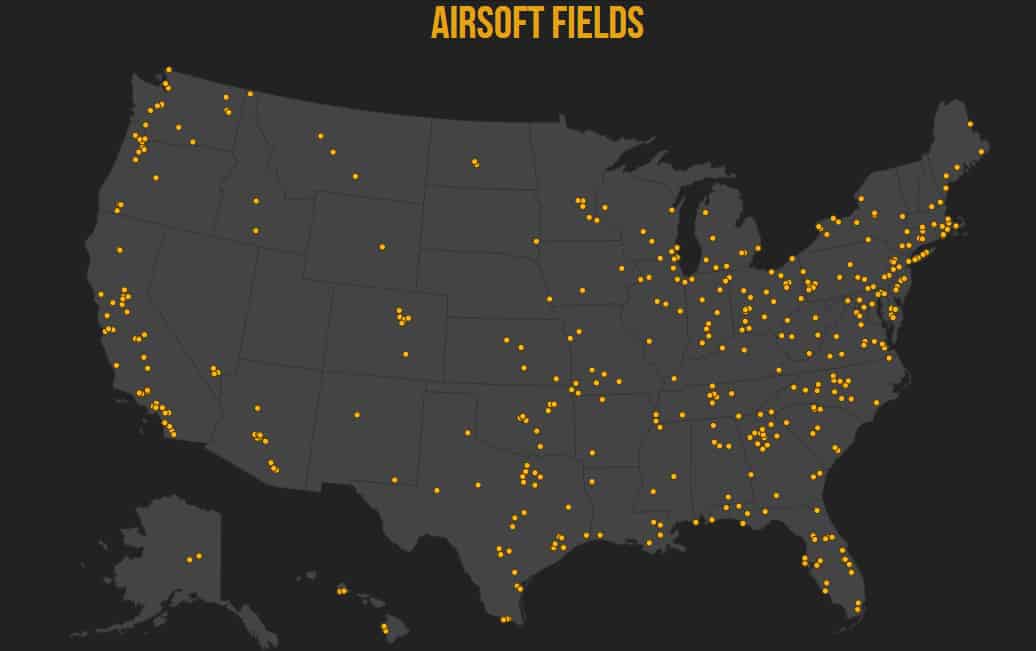 How Old Do You Have To Be To Buy An Airsoft Gun? 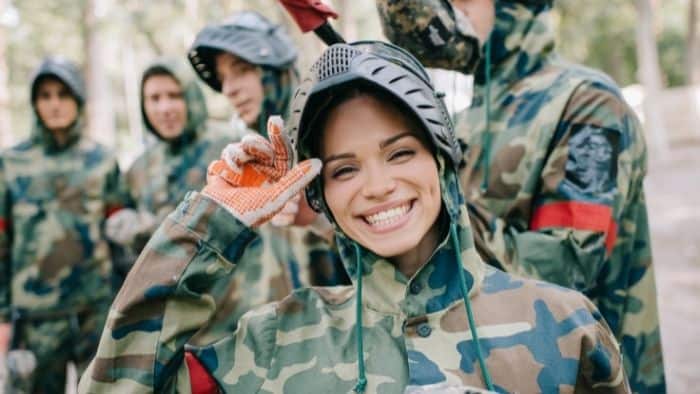 To purchase an airsoft gun, you must be at least 18 years old. You can buy them at retail shops or online stores.

According to MIR Tactical, there are only six states in the United States where airsoft guns are illegal:

According to Nationwide Children’s, kids are prohibited from buying airsoft guns until they are 18 years old. Airsoft guns are not as dangerous as real firearms but can injure users.

It could also lead to legal issues if its use isn’t supervised and controlled by a parent or guardian. For that reason, only adults of 18 years and above are allowed to buy airsoft guns.

Note that you don’t need to own an airsoft gun to play in an arena because you can purchase a rental package there.

Airsoft guns come in various sizes. When shopping for a gun for your kid, pick the correct size. Some kids may demand a rifle when a pistol or handgun might be a better fit for them.

Remember, only adults who are 18 and above are allowed to buy airsoft guns. 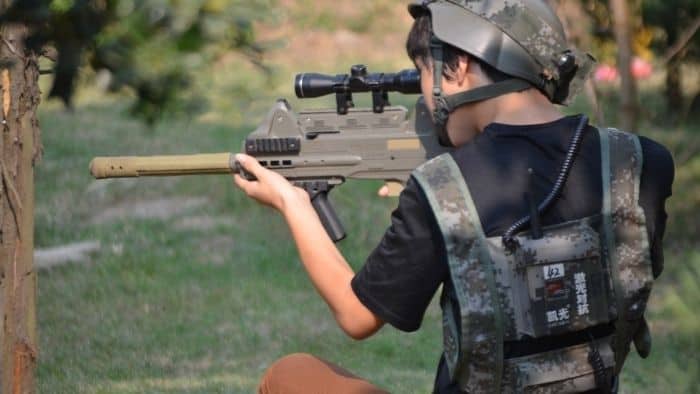 Backyard airsoft war games are perfect for beginners. Before going to the playing fields, start by practicing in your backyard.

Younger children might not be able to keep up with the game’s pace on airsoft fields where war games are played. War games are best played by those old enough to engage in skirmishes and battles.

Backyard airsoft is also excellent when you cannot access an airsoft field. You can enjoy it with family and friends. And the good thing is that you will have control of the game, and there will be no restrictions for younger kids.

Ensure that you have all the required gear and teach them some airsoft rules before playing. See here.

When Was Airsoft Invented?

Airsoft guns were first used in the 1970s in Japan. It was first used by photographer Ichiro Nagata who made a model gun that wasn’t as dangerous as an actual firearm.

It became a great alternative for shooting enthusiasts and the rest of the population partly because of Japan’s stringent gun ownership laws.

In the late 1980s, airsoft technology spread to Europe and then to the US, and airsoft became a popular game played by all ages since then.

Airsoft weapons are also used for target practice by the military as they provide a cheaper and less dangerous option.

Airsoft games can be an exciting way for kids aged 12 and up to enjoy their spare time. States have different laws on age requirements for purchasing and using airsoft guns. Check with the local or state authorities to ensure you do not break any airsoft gun laws. Do not forget to keep your child safe when they’re playing this action-packed war game!