We’ve all felt it at one point or another: that irresistible urge to do what everyone else is doing simply because we want to be friends with those around us.

Sometimes, this can include things that the teen doesn’t want to do or things the teen feels are wrong.

Whether it’s trying out a trend, moving too fast in a relationship, or smoking weed, peer pressure has a knack for making good people do bad things.

According to The Monitoring the Future Survey, “Teens who drink alcohol and do drugs are more likely to convince their friends to do it too”.

While we can’t eliminate peer pressure from our lives altogether, there are ways to work on minimizing its effect and keeping your cool when friends are asking you to participate in things you’re not comfortable with.

In this article, we’ll take a look at fifteen ways to resist peer pressure and not look uncool whilst doing so. 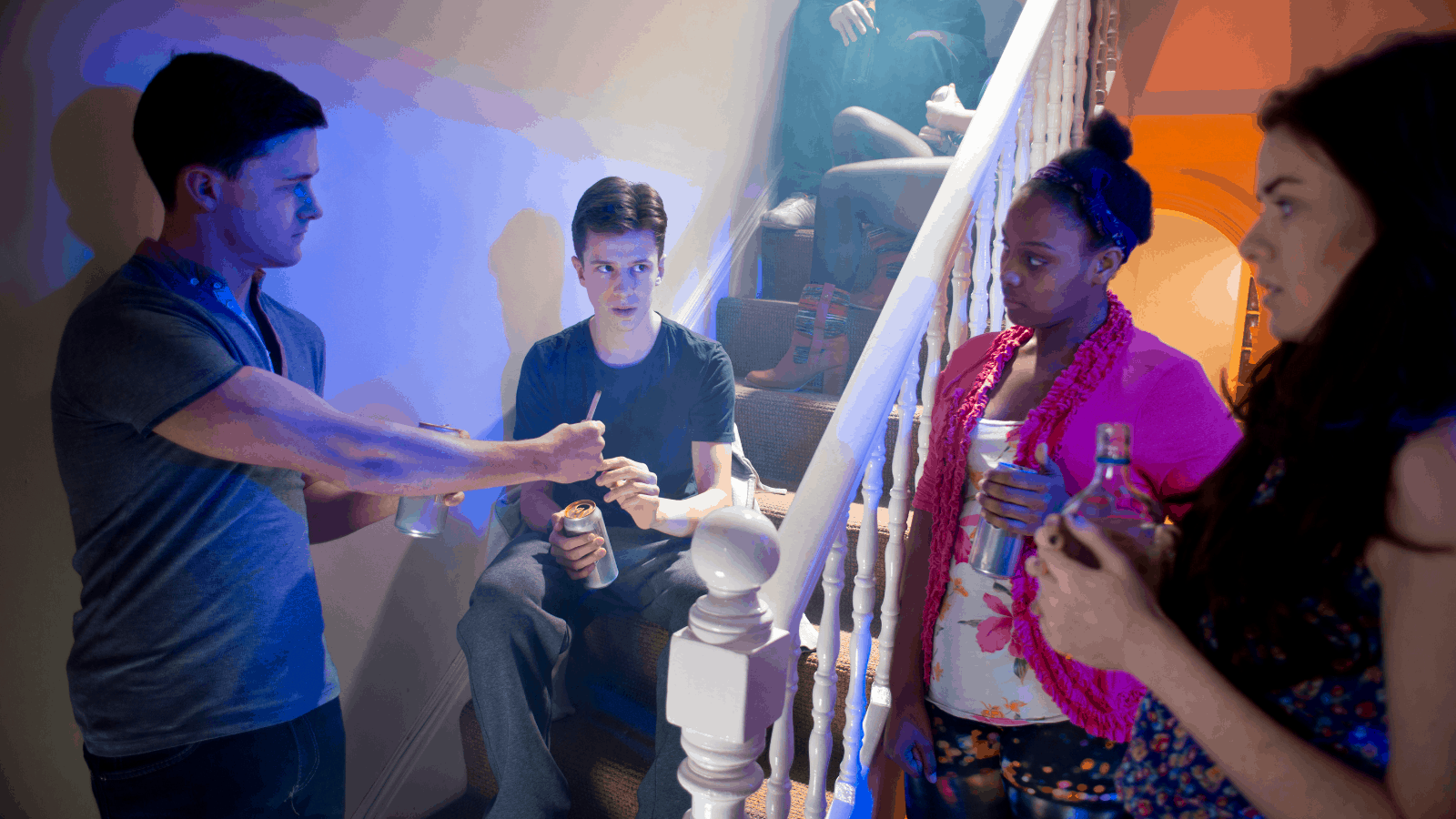 Not all teens have the confidence to “just say No!”, however, if you do, then this is by far the best way to avoid teen peer pressure.

You can say something like “Thanks, but I’m not into that kinda thing”, or “I don’t need that to have fun, thanks”.

2. Make A Joke Or Use Humor

Your teen might not be strong enough to say “No” directly, but they could use humor to deflect and avoid the situation.

Saying things like “Wow, you know I’d be on the floor if I had to smoke that”, or “I’m not ready for the parents to kill me just yet”, can help them not sound too ‘goody goody’ whilst still saying no thanks.

Using a good reason is always a plausible excuse as to why you can’t do something.

Perhaps you have a soccer match coming up, or you’re visiting your gran this afternoon.

Basing the reason on something that’s really happening, makes it more believable.

4. Blame It On Your “Strict” Parents

All teens know that parents wouldn’t want them to be doing certain things. This excuse is very believable.

Pulling out the “My parents check up on me all the time, I wouldn’t be able to get away with it” excuse, puts the blame squarely on parents that are really strict.

5. Say You Already Have Other Plans

This one is very simple. If you don’t want to participate in something, you can easily bow out and say that you already have plans to do something else that day.

If you can’t come up with a better excuse you can always say that you’re not feeling great.

No one wants to hang out with someone that’s not feeling well.

7. Say That You Have Too Much To Do

You can blame sports or club activities or homework or even family events coming up, that make it impossible for you to join them.

Another great excuse is that you’re just too tired to join your friends.

9. Say You’ve Already Tried It And Didn’t Like It

Sometimes you might need to tell a white lie. You can say that you’ve tried it and it made you really sick, so you don’t want to do that again.

Say you can’t do something at the moment, is a great tactic that will keep them from pressuring you into doing something when you do not want to.

11. Offer To Be The Designated Driver

Even though this carries a lot of responsibility, if you feel that your friends are getting into things that you don’t want to participate in, you can be there to ensure they get home safely.

12. Ask Your Parents For Help

I’ve always told my children that no matter what, if they ask for help, I’ll be there for them – no questions asked.

Tell your teens that if they feel like a situation they’re in is getting out of hand, and they need an out, that they can text you, and you’ll come to fetch them.

They can blame me for being too strict and coming to fetch the early.

If you are in a situation that could potentially lead to peer pressure, simply say you need to be somewhere else and leave.

Just like simply saying “No”, not all teens will be strong enough to do this.

You can say “Thanks so much, it’s been fun but I have to go now. See you around.”

Not all teens might feel peer pressure to do things that they’re not comfortable with.

Find a friend that you know has the same thoughts and feelings as you and stand your ground together.

You can discuss and agree on where you stand in certain situations and support each other to get out of situations where you’re not comfortable.

If you are finding it hard to get out of peer pressure, find new friends that aren’t into what your old friends are trying to get you to do.

This can be very hard, but if your teen really doesn’t want to be involved with the things others are doing, then it might be time to reevaluate who they hang out with.

Here are some awesome comebacks to practice saying to help you avoid peer pressure:

It’s understandably very difficult for teens to avoid peer pressure. Teens don’t want to appear uncool by saying “no.”  They don’t want to hurt their friends’ feelings (or boyfriend/girlfriend) or be removed from the invite list. Neither do they want to be labeled as a person who has no real fun.

Everyone wants to feel included and accepted as part of a group of friends.

Ultimately, they need to learn to stand up for themselves and not feel the need to make excuses, but in the meantime, using the above methods of saying “No” can make these situations easier to deal with.

You might also benefit from reading: How To Teach Teens To Fact Check Media They Consume